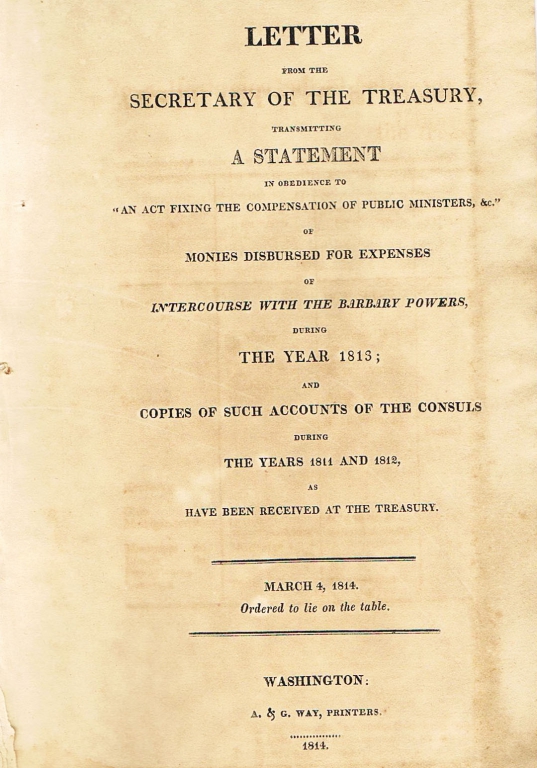 LETTER FROM THE SECRETARY OF THE TREASURY, TRANSMITTING A STATEMENT ...OF INTERCOURSE WITH THE BARBARY POWERS DURING THE YEAR 1813...

12 page Removed Government Document Of An Accounting Of All Expenses By American Consuls During 1811-13. 12 pages, dated March 4, 1814, Removed Government Document Titled: "Letter From The Secretary Of The Treasury Transmitting A Statement In Obedience To "An Act Fixing The Compensation Of Public Ministers, etc." Of Monies Disbursed For Expenses Of Intercourse With The Barbary Powers, During The Year 1813; & Copies Of Such Accounts Of The Consuls During The Years 1811 & 1812 As Have Been Received At The Treasury." Large 12 page US Government printed Document, approximately 13 inches high X 7 3/4 inches wide, detailing in text & charts, all payments with respect to the expenses of the U. S. Consuls at Tunis & Tangiers for years 1811 to 1813. Accounts for Richard Jones at Tripoli had not yet been received. Price for "service" provided, & "service" rendered in dollar cost/payments are recorded.

A very interesting look at the cost of maintaining relations with the North African Barbary States aka "Barbary Pirates." Contains ledger entries from the American consulates at Algiers, Tunis, and Morocco. These include gifts to the bashaws, charities to "poor Christian slaves", money for "distressed American seamen", bribing the police for a sailor in prison, tips for porters, captains, etc., cash for slaves to help celebrate the 4th of July. The U.S. engagement here stems from the Tripolitan war of 1801-1805. The American objective was to try and pay for the release of the Christian slaves, made all the more difficult as the United States and Great Britain were engaged in the War of 1812. Many of the payments are thinly disguised bribes usually described as "gifts." They were the cost of doing "business" with the pirate states. Letter of Transmittal Dated March 3, 1814 & SIGNED IN TYPE by G. W. Campbell. Also SIGNED IN TYPE by Consuls C. D. Coxe & James Simpson.

"George Washington Campbell (1769-1848) was an American statesman who served as a Congressman, Senator & State Supreme Court Justice from Tennessee, U. S. Ambassador To Russia and the 5th U. S. Secretary Of The Treasury from February to October 1814."